Two romantic and classical artists from Paris, in the city, in a wonderful world of life and trash, the RDLS Collective – Kraken & Chery, who like the impressionists, went out into nature to paint in front of the subject… but their nature is to look online, at TV, at film… and in the streets. See their work emerge as it is branded on a concrete wall, a canvas or a sheet of paper.

Born in 2009, the RDLS Collective has evolved over the past five years through squat and gallery shows, working the streets of Europe. Their home base is Paris, where they began at La Jarry, the largest artist squat in Europe. Today they continue to collaborate on individual and collective large scale projects at Le Wonder atelier in the North of Paris. DIGITAL PLEASURE (2016) is their first solo show in the Netherlands. In the previous they also exhibited at the new Urban Art Fair in Paris at the booth of Galerie du Jours Agnès B. with whom they will soon launch new designs commissioned for the Agnès B fashion label.

“Release the Kraken… already alive and well, hiding near a church in Paris… skilled in climbing from roof to wall, leaving traces all around town.
Chery has the glasses. Every inch of paper is regarded through these little glasses and with a steady hand, every brush stroke, every line precisely sketches out a new story.

With drunken abandon, images flow freely and joyfully, collected from wandering and searching in cyberspace.

The night-shift… work in the studio coupled with nightly field-trips through the darkness of the cityscape.

Chery: Blending natural and urban elements in an inextricable bond these improbable relations in his work are expressed on a large scale, with a hint of dark wit.

Kraken: Painted or exquisitely drawn his works are an accumulation of human and animal body parts, collected and collaged from all sources, layered with human emotion. The personal and sentimental are amalgamated in a collective and concrete poem. 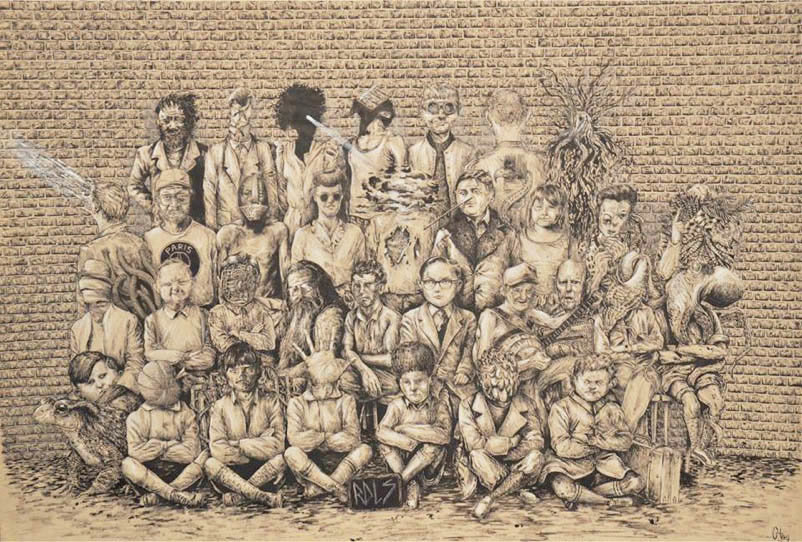